The Wuhan coronavirus continues to wreak havoc across the globe. It caused a 600 point sell off in the Dow Jones on Friday, prompted the first U.S. quarantine in a half century and has resulted in various travel bans around the globe. Famously, even tourist “hot spot” Iraq doesn’t want Chinese citizens coming into the country.

In addition, it appears as though the numbers coming out of Hubei province are accelerating, with the area reporting 1,921 new cases and 45 new deaths as of Saturday night.

While I am not going to comment about various theories regarding the virus’ origin that have been circulating the internet, I will say that these reactions to the virus have all been (mostly) to numbers provided to us by the Chinese government.

The skepticism around the Chinese government’s data comes as no surprise to me. I have spent more than a half decade researching U.S. listed China based companies and working daily and directly with Chinese nationals to uncover fraud being perpetuated on American capital markets.

The research of the firm I worked at for five years and the story of that firm’s partner, Dan David, was featured in a documentary called The China Hustle that was produced by Academy Award winner Alex Gibney and backed by Mark Cuban’s film company, Magnolia Pictures. While not an expert, I consider myself to have a better understanding of the ethos coming out of the country than most people.

And in my opinion, I believe people should harbor a skeptical opinion of anything that comes out of the Chinese government. 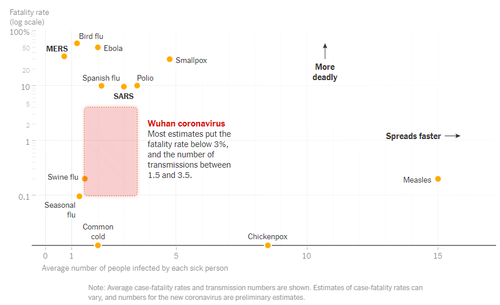 For these reasons, I am frightened by the amount of people writing this outbreak off with direct comparisons to the normal flu. I am also alarmed by the consistent travel in and out of China that has been occurring while the U.S. government has dragged its feet in suspending flights.

“China has about four times as many train and air passengers as it did during the SARS outbreak,” the New York Times commented. The number of people affected has already skyrocketed past the SARS outbreak. 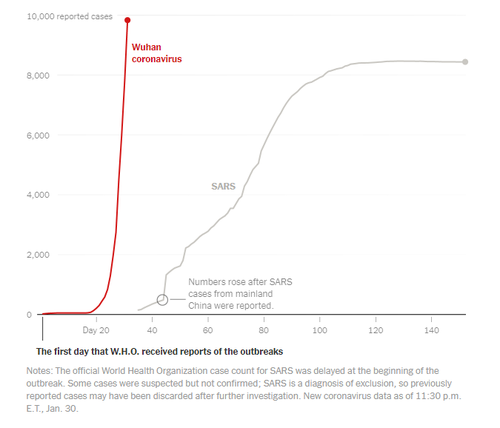 If the numbers coming out of China are being altered, the international fatality rate should tip us off to it. As the data set of infections outside of China continues to grow and inevitable fatalities are reported (even at a ~2% clip, it is inevitable), we should be able to gauge for ourselves whether the data we have been using from China has, in fact, been accurate.

The World Health Organization praised China during their press conference last Thursday for taking unprecedented measures to quarantine the country. In my opinion and based solely on action/reaction common sense, the measures being taken in China – quarantining 50 million people in over a dozen major cities – do not match up with the numbers that we have been given by the government.

Certainly, unconfirmed videos that continue to surface on Twitter and other social media sites paint a far more dire picture than the numbers appear to be showing.

The potential consequences of finding out that the numbers coming out of China are suppressed could be meaningful. It could put the story much deeper into the mainstream media and have a profound effect on capital markets and the behavioral psychology of people living outside of China.

As a reminder, despite the government saying that the risks of outbreak are low outside of China, I’ll remind readers that it costs nothing to take extra precautions by stocking simple items that you will eventually go through even if an outbreak outside of China doesn’t happen.

These items include extra laundry detergent, N95 or N100 facemasks, 30 days worth of food supplies, disinfectant wipes and sprays, cold medicine to mitigate potential symptoms, hand sanitizer (or some type of anti-septic), latex gloves and even goggles and tyvek suits. There are several checklists on the internet, like this one, that can be valuable for those looking to take some extra precautions.

Let’s see what the numbers continue to tell us in coming days.